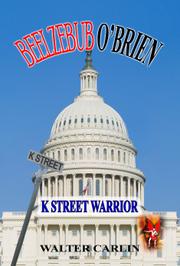 In a town where everybody is for sale, how is an agent of hell supposed to corrupt anyone?

Carlin’s latest novel uses Washington, D.C.’s lobbyist scene as a backdrop for a broad religious satire that reserves its deepest cuts for American business-as-usual practices. Billy O’Brien is a South Dakota-raised MBA, who, despite experience in corporate America, is unprepared for his new lobbyist job at I.D.E.A., LLP, a shadowy lobbying firm with fingers in innumerable pies. Freshly promoted to K Street Warrior, essentially a glorified bag man for government bribes and payoffs, Billy gets killed in a traffic accident and is promptly sent to hell where he’s “adopted” by two mid-level bureaucrats and offered a golden opportunity. If he helps corrupt six uncorrupted souls, he can take part in an exchange program with heaven, basically a “get out of Hell free” card. Billy jumps at the chance, but when he meets Lisa, a beautiful woman possibly playing for the other side, his doubts start to mount. When he mysteriously returns to his old life, with new but familiar players in the game, will the better angels of Billy’s nature win out? Carlin displays a knack for dialogue and a superb sense of pacing, and his raging cynicism makes for several entertaining broadsides at recent developments, particularly the Supreme Court decision regarding political spending as speech. However, many points are made to the detriment of the story; the satire is extremely broad, and except for the touchingly inept Billy, whose naïveté protects him from being evil, the characters rarely register as anything other than types. Too much of the story veers into cliché, preventing the satirical elements from taking flight.

More screwball than satire, the amusement factor can’t raise the narrative from the weight of its too-familiar elements.