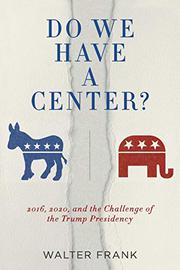 DO WE HAVE A CENTER?

A writer offers an analysis of the 2016 American presidential election, the meaning of Donald Trump’s victory, and a way forward to a less divisive brand of political discourse.

Frank (Law and the Gay Rights Story, 2014, etc.) begins his provocative study with a conventional observation. The contemporary political landscape resembles a “battle between two feudal armies,” an irresolvable war between mutually exclusive ideologies espoused by camps that wouldn’t deign to break bread with their adversaries across the aisle. But, the author avers, that polarization didn’t commence with Trump’s ascendancy to the presidency. And neither this problem nor his election is widely understood. Frank rejects the oft-repeated narrative that Trump leveraged “white racial anxiety” into votes. While he certainly exploited racial tensions to his political benefit, the reasons for his appeal are both more complex and numerous. First, Trump had the advantage of running against a notably uncharismatic candidate who presided over an incompetently managed campaign—Hillary Clinton lacked both a stirring “grand vision” and a real sense of the electorate’s demands. In addition, Trump tapped into a profound wellspring of civic frustration that included an exhaustion with military adventurism, crony corporatism, and elite privilege. The author anticipates that Trump will be an “extremely formidable candidate” in 2020. But Frank sketches a path forward for Democrats to an electoral victory, and for the country as a whole out of the weeds of bottomless partisanship, a genuinely centrist comportment based on a “willingness to consider all the possible ways to attack a problem without pre-conceived biases against one set of solutions because of their source.” The author provides an intellectual model of the very centrism he advocates. While he candidly declares his own political allegiances—he’s a Democrat hoping that the president loses in 2020—he sympathetically assesses those who supported Trump, and provides a lucid account of their motivations. In addition, his analysis of the shortcomings of Clinton’s campaign is similarly astute: “It was as if the Clinton campaign did not even see Pennsylvania as a real place where real people lived in a variety of settings. Rather, for her campaign the state was simply a statistical aggregation of voters and since her voters were primarily in Pittsburgh and Philadelphia, that’s where she went.” His anatomy of the principal causes of the nation’s combative partisanship—he largely attributes its rise to the emergence of uncommonly emotional issues—is less persuasive. There have been issues of deep moral and existential exigencies over the course of the nation’s entire history. But Frank’s study as a whole is a valuable one. While he expresses alarm at the damage Trump may be inflicting on the nation’s political institutions, he hopefully extols the resilience of America’s federalist system. In fact, he avoids even a hint of melodramatic fatalism: “We have every reason to be smart. We have no reason to despair.”

A scrupulously reasonable and analytically rigorous account of a historically significant election.