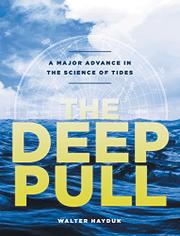 A Major Advance in the Science of Tides

Chemical engineer and debut author Hayduk offers new theories on the workings of tides in this work.

The difference in height between high and low tide is generally larger near the poles than at the equator, but this rule isn’t always true. The ever-curious Hayduk looked into the reason for this inconsistency, but he felt that the current scientific model for tides couldn’t satisfactorily explain it. Therefore, he set out to do his own research, and this work contains his findings regarding the functions of tides, some of which challenge current scientific theories. At the heart of tidal theory is the force of gravity, and the author recounts his attempts to understand the effects of lunisolar gravitational forces on Earth—that is, the “pull” of the sun and the moon—by analyzing tidal patterns and anomalies from the Cape of Good Hope to the Bay of Fundy. “Sometimes, nature leaves a sufficient number of clues as to how it gets things done,” Hayduk writes in his introduction. “This makes it possible for us to rediscover one of its mysterious devices and methods—if we search for it.” He comes to the conclusion that extensive, deep sections of the ocean are “continually subjected to the lunisolar gravitational forces,” which explains numerous effects. Hayduk’s prose, interspersed with numerous diagrams and charts, is technical, but not so opaque that interested amateurs can’t follow his arguments: “The strength of the gravitational force on the lunar belt is more than double that of the solar belt; that is to say, the moon is more effective in moving ocean water faster or farther than the sun is.” Many readers will learn a lot more than they currently know about tidal science. That said, the validity of some of Hayduk’s theories (regarding, for example, the idea that the moon’s and sun’s gravity affect wind, which he notes is “Nowhere…in the literature”) will need to be scrutinized further by other members of the scientific community. However, anyone who’s intrigued by the complex, swirling machinations of water and air will enjoy how he relates his ideas.

A thoughtful challenge to the tidal status quo.