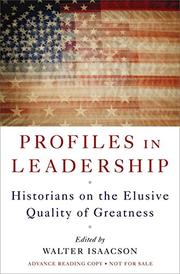 Historians on the Elusive Quality of Greatness

Renowned historians describe the leadership secrets of presidents, generals, preachers, a baseball manager and others.

This bright anthology from the Society of American Historians gathers essays from top-flight historians—Sean Wilentz, David M. Kennedy, Jean Strouse, Alan Brinkley, David Levering Lewis, etc.—on the leadership skills of an array of Americans. As Isaacson (Einstein: His Life and Universe, 2007, etc.) notes in his introduction, a major theme is that the greatest challenge of leadership is knowing when to be pragmatic and when to adhere to principle, which is nicely illustrated by Brinkley’s piece contrasting Herbert Hoover as “a victim of his convictions” and Franklin Roosevelt as the experimenter. Kevin Baker shows how the celebrated baseball manager John Joseph McGraw shined as a master clubhouse psychologist. Evan Thomas points to Robert Kennedy’s insecurities as the source for his empathy for the downtrodden. David M. Kennedy finds that the ever-optimistic Dwight Eisenhower’s ability to elicit cooperation served him well at war and in the White House. Two pieces stand out, both on lesser-known historical figures. Frances FitzGerald vividly evokes the life of Charles Finney, an upstate New York evangelist of the 1800s, whose emotional preaching upset the established clergy and inspired temperance, abolition and other major reform movements. In a wonderful essay on Pauli Murray, an early civil-rights champion, Glenda Gilmore shows how this remarkable African-American—feminist, lawyer, poet, ordained Episcopalian priest and friend of Eleanor Roosevelt—relied on persistence and self-invention to become a powerful opponent of Jim Crow. Other essays cover Ulysses S. Grant, J.P. Morgan, Joseph (Chief of the Nez Perce Indians), W.E.B. Dubois and Wendell Willkie. In an analysis of leadership failures, Robert Dallek explains why our optimism over new presidents invariably leads to disappointment as they craft poor policies and stumble over foreign crises.