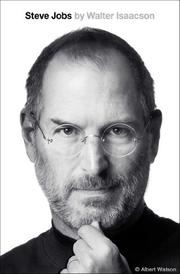 An unforgettable tale of a one-of-a-kind visionary.

With a unique ability to meld arts and technology and an uncanny understanding of consumers' desires, Apple founder Steve Jobs (1955–2011) played a major role in transforming not just computer technology, but a variety of industries. When Jobs died earlier this month, the outpouring of emotion from the general public was surprisingly intense. His creations, which he knew we wanted before we did, were more than mere tools; everything from the iPod to the MacBook Pro touched us on a gut level and became an integral part of our lives. This was why those of us who were hip to Steve Jobs the Inventor were so moved when he passed. However, those who had an in-depth knowledge of Steve Jobs the Businessman might not have taken such a nostalgic view of his life. According to acclaimed biographer and Aspen Institute CEO Isaacson (American Sketches: Great Leaders, Creative Thinkers, and a Heroes of a Hurricane, 2009, etc.) in this consistently engaging, warts-and-all biography, Jobs was not necessarily the most pleasant boss. We learn about Jobs' predilection for humiliating his co-workers into their best performances; his habit of profanely dismissing an underling's idea, only to claim it as his own later; and his ability to manipulate a situation with an evangelical, fact-mangling technique that friends and foes alike referred to as his "reality distortion field." But we also learn how—through his alternative education, his pilgrimage to India, a heap of acid trips and a fateful meeting with engineering genius Steve Wozniak—Jobs became Jobs and Apple became Apple. Though the narrative could have used a tighter edit in a few places, Isaacson's portrait of this complex, often unlikable genius is, to quote Jobs, insanely great.

Jobs was an American original, and Isaacson's impeccably researched, vibrant biography—fully endorsed by his subject—does his legacy proud.