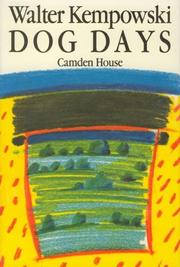 Popular German novelist Kempowski etches a comic portrait— partly self-portrait?—of an author as aging narcissist living the good life in a disagreeable world. Successful novelist Alexander Sovtschick, a 60-year-old literary princeling in his northern German spread, complete with swimming pool and a 72-foot stretch of bookshelves, can be extremely funny—and tiresome. Much has to be waded through before the comic payoffs, chiefly his self-aggrandizing (when not self-pitying) interior monologues that circle around again and again to the same subjects. Among them: the rebukes he suffers as a conservative author for not writing something of contemporary relevance, and the sexual attractiveness of young women—or, rather, girls, since he seems to have a Lolita complex. All this is played out during the hot July/August days while Sovtschick's wife is on vacation in France. He collects around him two teen- age sisters as household help, two visiting young nieces, and two neighbor girls. He does little more than fondle their ear lobes, but he feels like a caliph, while being treated like a vassal. His paradise is besieged when another of his romp-mates, a retarded girl from a poor family in the neighborhood, is murdered. Meanwhile, he is supposed to be writing a novel about a man in the depth of winter writing about a man in the heat of summer. Kempowski is at his wittiest when spoofing the whole literary endeavor, including public readings at bookstores and the politics of prize-granting committees. He is also very good on dogs, of which his author has three. There's laughter in this playful novel as a reward for readers willing to put up with long stretches of the inner life of a German Philistine in an intellectual's clothing.