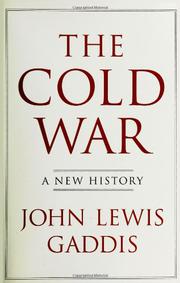 Following the defeat of the Axis powers in WWII, the western democracies faced off against their former ally, the totalitarian Soviet Union, in a global contest to determine the shape of the future. Each side’s nuclear arsenal made total war unthinkable, but neither could afford to back down. Gaddis (History/Yale; The Landscape of History, 2002, etc.) condenses this sprawling story for a new generation of readers. He resuscitates such almost-forgotten acronyms as SALT, START, SEATO, NATO and MAD, and he places the wars in Korea and Vietnam within the context of the larger struggle and reminds us how lesser tussles over the Chinese offshore islands Quemoy and Matsu, the African nation of Angola, Cuba’s Bay of Pigs and Afghanistan before al-Qaeda also affected superpower relations. He discusses the impact of the Berlin Wall, the Cultural Revolution and the Marshall Plan, as well as the Berlin airlift, the Cuban missile crisis, the downing of Gary Powers’s U-2 spy plane, Solidarity’s Gdansk shipyard strike and Nixon’s trip to China. The Cold War’s surprisingly peaceful outcome was by no means assured. The democracies forged many an unseemly compromise, suffering frequent setbacks and not a few outright defeats before prevailing. In the end, however, as Gaddis demonstrates, Marxism, which failed to ensure economic success even as it stifled political and social justice, proved no match for the vision of George Kennan or the stirring rhetoric of Kennedy and Reagan in Berlin, Churchill at Westminster College and John Paul II in Krakow.

A superb introduction to a complex period in world history.

THE LANDSCAPE OF HISTORY
by John Lewis Gaddis
Nonfiction