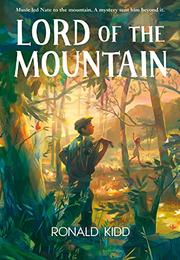 LORD OF THE MOUNTAIN

With the birth of country music as his backdrop, a boy searches for music’s place in his troubled family.

Thirteen-year-old Nate Owen’s father, pastor of the Church of Consecrated Heaven and Satan’s on the Run (located in a tent on the empty lot next door), preaches relentlessly that music is a sin. Nate can’t understand why. There’s plenty of music in the Bible. Nate’s family has been broken since Nate’s sister died when Nate was only 2, and Nate wants out. It’s 1927. Nate lives in the divided town of Bristol, which straddles the Tennessee/Virginia state line. That summer a man from Victor Records comes to record mountain music for the very first time. Nate, captivated, can’t keep away. Gradually, and believably, he becomes friends with and then an employee of the soon-to-be-famous Carter family, musicians from nearby Scott County. The Carters and the fictional characters are white, but Lesley Riddle, a real black man who helped A.P. Carter find songs, makes an important contribution, helping readers understand that while Bristol’s downtown sign read “A Good Place to Live,” that was true only for white residents. Nate tells the story in retrospect, so his voice often reads older than 13, and sometimes Kidd can’t resist throwing in a bit too much of his research, but the real history melds seamlessly with Nate’s family story, and the emotions ring true through the hopeful but bittersweet end.

THE YEAR OF THE BOMB
by Ronald Kidd
Children