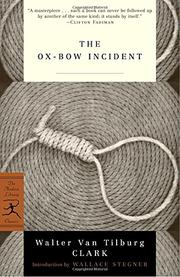 Since it first appeared in 1940, Clark’s psychological western has steadily gained admirers, both in its original form, and as a popular film. This new edition adds much supplementary material in its effort to confirm the novel’s status as a modern masterpiece. There’s a reading-group guide, a few contemporary raves, and an article from 1973 by Wallace Stegner that argues for Clark’s genius, more in the vein of Henry James than Owen Wister. Stegner contends that Clark wanted to undermine the extreme masculinity in the book, and that he parodies the generic western tale. Which was not the view of Kirkus back in 1940, who found Clark’s story of good and evil on the frontier to be completely bewildering. Admiring the skill in “laying bare . . . the thoughts and emotion of men,” Kirkus thought the narrative “dragged,” the struggle “was first fatiguing, then boring.” Virginia Kirkus herself, fearing a feminine bias, passed it on to an “expert” in westerns, but he agreed: dullsville.