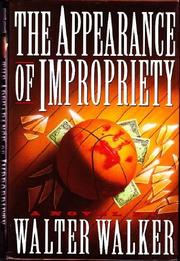 THE APPEARANCE OF IMPROPRIETY

Plagued by the usual athletic demons of drugs, greed, lust, and unsatisfactory contracts, a professional basketball team crashes and bangs through a season and into trouble—from which only the very best lawyer in sports can extract them. Walker (The Immediate Prospect of Being Hanged, 1989, etc.) is one of the better lawyers in fiction. The San Francisco GoldenGaters have been playing below their ability. Who's to blame? Womanizing coach Booby Sinclair? All- American, cocaine-sniffing Oliver Dawkins, whose wife has to do all the thinking for him? Rynn Packard, an Ivy League graduate with the White Man's Disease? Superstar W.E.B. (pronounced ``Dubbyabe'') Pancake, a man with some missing history? Whoever's fault it is, supermarket mogul and owner of the `Gaters, Teddy Brandisi of Boston, is not getting a lot of fun out of his franchise. The pressure is on the team and the managers to produce, but victories continue to go up in smoke. Meanwhile, Brandisi's not the only one leaning on the team. Sports columnist Colin Cromwell has started a campaign to drive Coach Sinclair from the scene, and when he's not hounding Booby, he's printing broad hints about Mr. Pancake's past. There's trouble even when the team wins: suggestions of point shaving and games thrown float around; a woman's participation in a team orgy turns into a legal action; and a body flies from a sixth-story window onto a Boston sidewalk. One by one, the players dump their lawyers and agents and turn to lawyer/agent Reynolds Rosenthal. They're in the best possible hands. So is the reader. Walker, a very funny, very deft writer who clearly respects basketball, tells a sports story that spares no one in the business. Not just for the fan.