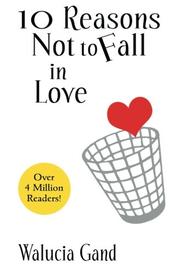 10 REASONS NOT TO FALL IN LOVE

Elizabeth Blackburn is the new girl in school. Her goals are simple: be the top student at ritzy Star Lake High and fend off the attention of gorgeous, arrogant Vincent Richardson. Vincent has it all: He excels “in art, music, sports, and academics”; he’s also good-looking, wealthy and popular, and used to getting everything he wants. Elizabeth, whom he persists in calling “Liz” no matter how many times she tells him not to, throws him for a loop. Soon, she has passed him in every subject and stubbornly refuses to give him the time of day. And when she lets her hair down, she’s the most beautiful girl he’s ever seen. He’s undeterred by rejection, and when she gives him a list of 10 reasons she won’t fall in love with him, he’s determined to eliminate them one by one, whether she wants him to or not. Romance starting as rivalry is a familiar premise but one that still resonates—the denizens of Wattpad rated the story highly—and Gand’s setup, giving Vincent 10 obstacles to methodically wipe out, has promise. Her prose is straightforward and readable, but Gand sometimes takes the bickering too far. Vincent’s persistence often crosses the line, forcing Elizabeth to physically fight him: “Elizabeth tried to push him away, but Vincent used his weight to keep her down.” Coupled with his violent tendencies (he gets in multiple fistfights over the course of the book, occasionally attacking other boys who dare to look at Liz), Vincent’s behavior comes off as rather predatory instead of romantic.

A problematic lead character could leave this book struggling to find a mainstream audience.