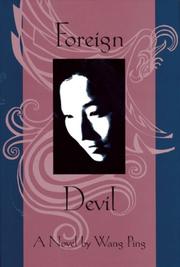 Chinese poet and storywriter Wang (American Visa, 1994), based in the US since 1985, offers a vivid if overstuffed debut novel of life and love in Red China. Ni Bing has been different right from birth, different in ways that only increase as she grows older and must choose between being ``a Party member'' or a ``foreign devil''—that is, someone who associates with foreigners and has foreign ideas. By the time Ni Bing makes that choice, however, she has lost all her faith in Mao and the Party. As a child she saw her mother, a talented dancer and teacher, publicly humiliated during the Cultural Revolution; as a teenager, she innocently got a young man into trouble with the authorities; and to atone she worked long hours in the fields before going to a teacher's training college, the only place she was allowed to apply. There, she was made to guard a desperately ill teacher who was being forced to ``confess'' her political errors. These political memories alternate with memories, some frightening and initially inexplicable, of her childhood. Both her mother and her paternal grandmother were unusually demanding, and Ni Bing felt close only to her father, a naval officer. Then, at the teachers' college, she meets Van, an older student who seduces her, promising that they will live together in America; but though he helps her get into a proper university, he soon proves to be selfish and domineering. Events move at a dizzying and sometimes barely credible pace, as Van's American cousin promises, and delivers, her a place in a US college. The new China is a lot like the old, though, and before she can leave, Ni Bing (who seems at times more a symbol than a character) must endure bureaucratic obstruction and corruption that would deter all but the toughest. A litany of horrors faced down by a true-grit heroine, narrated in a fashion too hectic, cool, and distant to be affecting.