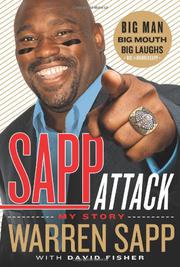 by Warren Sapp with David Fisher

A former All-Pro defensive lineman with a mouth as big as his massive frame dishes on life in the NFL trenches and various controversies that dogged his career.

One of the greatest defensive players of his era, Sapp helped transform the perpetually pathetic Tampa Bay Buccaneers into Super Bowl champions. He was also one of the game’s harder hitters, biggest talkers and more controversial figures. With assistance from Fisher, Sapp chronicles his poor upbringing in Apopka, Fla.; his starring role on a University of Miami team that included future NFL legend Ray Lewis and wrestling icon Dwayne “The Rock” Johnson; and his 13 seasons in the NFL. Unfortunately, his inimitable style can best be characterized as self-aggrandizing and far less hilarious than the author thinks it is. While he manages to share a few interesting insider stories—among them insight into the fines that teams hand out to offensive linemen caught loafing after an interception—there’s little doubt that the spotlight will focus on Sapp’s contention that Miami alumni, including Michael Irvin and Jim Kelly, contributed to a pool of money that was doled out to college players for making big plays. He downplays the incident, but his intimation that Irvin and others contributed up to $5,000 to the pot is sure to generate headlines. Elsewhere, Sapp attempts to explain the circumstances around failed drug tests and his arrest on domestic abuse charges—incidents, he contends, greatly exaggerated by a misinformed media—while failing to address—as a member of the media—his own apparently erroneous labeling of Jeremy Shockey as the “snitch” who blew the whistle on the New Orleans Saints’ bounty program.

The literary equivalent of an NFL pregame show: obnoxious, frequently incoherent and only engaging when it actually focuses on the game.