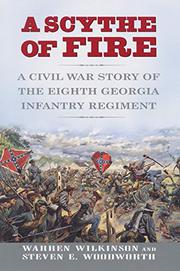 A SCYTHE OF FIRE

A Civil War Story of the Eighth Georgia Infantry Regiment

The story of a Confederate regiment, from the naïve enthusiasm of its muster in 1861 to its dissolution after the bitter surrender at Appomattox.

Following his fine history of a Union regiment (Mother May You Never See the Sights That I Have Seen, 1990), Wilkinson set to work on a Confederate companion volume, but died after finishing the research. Woodworth (History/Texas Christian Univ.; Six Armies in Tennessee, 1998, etc.) took over, assembling it into an engaging chronicle of a famous Georgia infantry unit. Using letters, newspaper accounts, diaries, and memoirs, the authors describe the war through the eyes of the soldiers, who have a far different view of great events than those behind the lines. Thus, the first battle of Bull Run was certainly a great Southern victory, but the men of the Eighth Georgia experienced it as a confused disaster. They rushed to and fro, suffered huge casualties, including their beloved colonel, and ended the day exhausted and in retreat; only afterward did they discover they had won. Skirmishes barely worth recording for posterity were, to men involved, bloody struggles full of heroics and tragedy. No less appealing than the fireworks is the nuts-and-bolts description of infantry life. Even by the standards of rural antebellum Georgia, conditions were awful. Food was bad, shelter skimpy, hygiene absent. Disease, as every schoolboy learns, killed more soldiers than battle, and the primitive medical care of the time killed still more. Yet most soldiers maintained their morale, faith in the justice of their cause, and confidence that God was not only on their side but looking after their personal safety. While this was probably the general attitude, readers should not forget that disaffected soldiers and deserters rarely wrote memoirs, and local newspapers were less likely to print their letters.

A superior example of unit history, which provides an almost inexhaustible treasure trove for history buffs because each regiment fought the same war, but each underwent a unique experience.