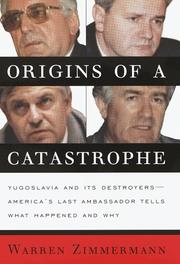 ORIGINS OF A CATASTROPHE

Yugoslavia and Its Destroyers

Another coroner's report on the death of Yugoslavia, this time by an observer with a literary bent, the US's last ambassador to that vanished nation. Zimmermann was posted to Belgrade in 1989, and his account begins with this period of tangible decline and ends with the final breakdown of talks among the republics and the eruption of violence in Slovenia, Croatia, and Bosnia-Herzegovina. Zimmermann unambiguously places principal blame for the demise of Yugoslavia on Serbia's Slobodan Milosevi, whom he judges ``an opportunist rather than an ideologue,'' a Jekyll-and-Hyde type dominated by his darker side. He views Croatia's leader, Franjo Tudjman, as a nationalist whose ``devotion to Croatia was of the most narrow- minded sort.'' And while myriad domestic and international players had a hand in Yugoslavia's demise, it was these two individuals, he argues, who are most responsible for the country's dissolution. Zimmermann drives home several significant points that are too often overlooked: Countering those who attribute the crisis to ``ancient Balkan hostilities,'' he stresses the crucial influences of a modern agent, television, in provoking extreme nationalism. Zimmermann also emphasizes the countless decent people who consistently opposed virulent nationalism. Any hope for the future lies with this reserve of Yugoslav humanists, who may ``one day help to build societies not driven by rabid nationalism.'' Finally, the diplomat draws universal lessons from the Yugoslav experience. From questions of minority rights to the international community's ability to meet ethnic challenges, ``the issues fought out with such savagery in Yugoslavia . . . apply around the globe.'' Zimmermann represents the best of the Foreign Service—a dedicated professional who brings both learned and instinctual insight to his work. His timely insider analysis is enlivened with unforgettable portraits of a bizarre cast of characters. (Author tour)