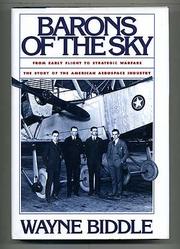 BARONS OF THE SKY

An earthbound account by Biddle (Coming to Terms, 1981) of the intrepid souls whose soaring aspirations helped launch a multinational aerospace industry. Biddle's attempt to combine institutional history with individual biography never quite gets off the ground, in large measure because of his insistence on portraying American aviation's pioneers as dependents of the government in general and the military in particular. At any rate, in this selectively detailed overview of US aeronautics from the Wright brothers' landmark flight through the early post-WW II era, the former New York Times correspondent singles out a handful of visionary aircraft makers and the corporations they created. Their ranks encompass the likes of Glenn Martin (an up-from- the-fairgrounds barnstormer), Jack Northrup (an intuitive technical genius with a flair for breakthrough designs), Donald Douglas (whose DC-3 was for many years the workhorse of the global village's skies), and Robert Gross (the East Coast investment banker who made a go, under the Lockheed banner, of the bankrupt business begun by the brothers Loughead). Also covered, albeit in cursory fashion, are such founding fathers as Boeing, Curtiss, and Grumman. In aid of his arguable premise that American aviation was ever an enterprise that could not survive, much less thrive, without substantive government support, Biddle goes out of his way to show how trailblazing airmen accepted, even solicited, federal patronage. At several points, he speculates portentously on the probable state of the aeronautics art, absent hot and cold wars. Ultimately, Biddle determines his subjects were neither merchants of death nor the paragons of technical progress depicted in their promotional literature. Unfortunately, that conclusion is lost in the shuffle of an accentuate-the-negative narrative that shortchanges at almost every turn aviation's avant-garde and its genuine contributions. (Twenty-four pages of b&w photographs—not seen.)