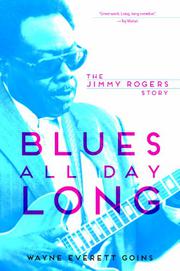 Biography of blues guitarist Jimmy Rogers (1924-1997), who “created a truly enduring sound that has made a direct impact on every generation that followed.”

Without his association with Muddy Waters, Rogers might be just a musical footnote, an artist whose one hit, “Walking by Myself,” enjoyed minimal commercial success. However, as Goins (Director of Jazz/Kansas State Univ.; Emotional Response to Music: Pat Metheny’s Secret Story, 2001) reiterates throughout, Muddy Waters might not have been Muddy Waters without Rogers, whose guitar was integral to perhaps the finest band in the history of Chicago blues. As much as mercurial harmonica master Little Walter or, later, piano stylist Otis Spann, Rogers was integral to the development and popularity of Muddy’s music, complementing the raw Southern sound of the frontman’s vocals and slide guitar. Of the sound that the two guitarists developed together, the author writes, their “relationship…was somewhere between two ballet dancers and two heavyweight boxers. They could sling each other around the room and never lose faith in one’s ability to catch the other. They could throw hard jabs at each other yet never catch a blow to the body.” Goins never lapses into academic impenetrability, and he demonstrates an impressive passion and ear for the music. Particularly lively are his illumination of the bustling Maxwell Street scene and his analysis of the 1970s blues revival in Austin, Texas, and along the coasts, which brought Rogers out of early musical retirement to attain a popularity beyond anything he’d experienced before—as well as financial success, including royalties from the likes of Eric Clapton recording his songs. However, the book could use some judicious cutting and editing, since it seems to include everything that anyone ever said in print about Rogers, as well as the name of every musician, club owner and tour promoter with whom he worked.

For blues aficionados, Goins provides a wealth of information on one of the underacknowledged masters of the Chicago sound.