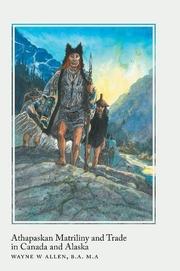 A scholarly book investigates why Athapaskan-speaking people trace their lineage through their mothers.

The Athapaskan languages are spoken among the Indigenous people of Alaska and western Canada (specifically British Columbia and the Yukon). These people have traditionally traced their descent from their mothers as opposed to their fathers, a rare custom for hunter-gatherer societies. Allen (Lessons Learned Along the Way, 2017) suspects that this tradition has its origin in local trading practices, specifically with the Tlingit, a non-Athapaskan coastal people who also trace their descent matrilineally. The coastal Tlingit had extensive trading networks with the Athapaskan people, who tended to live farther inland. The author argues that it was advantageous for the Tlingit to extend their system of matrilineal sibs (or clan groups) to their Athapaskan trading partners, which they did by marrying Tlingit women to Athapaskan men. The custom was often characterized by matrilocality: the practice wherein husbands would leave their own groups to live with the families of their wives. Using 19th- and 20th-century ethnographic works as his source material, Allen lays out the social and economic structures of the Athapaskan people prior to widespread European interaction, illustrating how contact between diverse parties spread unique matrilineal practices across a large portion of northwest North America. This short book was written originally as Allen’s master’s thesis in 1971 and has not been augmented to make it more palatable for a general readership. The author offers little background information to give context for the work’s relevance, and the prose is rather dense and jargon-heavy: “Among the Vunta Kutchin, Balikci noticed that sibs exogamy was not rigidly enforced. He also regarded the tendjeratsia sib as a convenient way of classifying the descendants of sib endogamous marriages.” The specialized language is occasionally broken up by lovely, uncredited, full-color illustrations of Athapaskan traders, elders, dancers, and scenes of domestic life. Though not for a wide audience, Allen’s book is deliberative and well-documented, and he manages to condense a wide body of research into one cohesive argument. Those interested in the culture of Athapaskan people should enjoy this investigation into their matriliny.

A thorough academic work on matrilineal descent among Athapaskan groups.