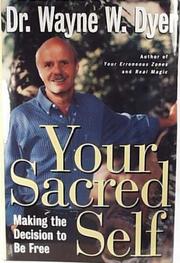 Making the Decision to Be Free

More eclectic advice on how to release the boundless resources that lie within, from the prolific Dyer. According to Dyer (Real Magic, 1992, etc.), each of us possesses a higher, invisible self in addition to the more familiar (but false) ego. Our essential task is to discover and act from the higher self, which is untouched by the fears, prejudices, and insecurities that normally control our existence and cause us so much unhappiness. Dyer suggests that we can do this in four steps: banishing fears and doubts; observing and distancing ourselves from our body and surroundings; shutting down the inner dialogues of our frenzied thoughts; and consciously following the guidance of our higher self instead of the ego with its illusions of separateness. He goes on to discuss the conflicts that arise as we move into the higher self, and he concludes with a vision of a transformed world as an egoless collective of sacred selves. Dyer draws on many sources, and his favorites include Carlos Castaneda, Emerson, the Course in Miracles, Transcendental Meditation, and Krishnamurti. He blends the Hindu doctrine of non-dualism and the higher self with stock American themes, such as how he has passed from a sinful past to a happy (and prosperous!) present and the need to keep saying to ourselves, ``I know I can do it.'' Dyer has some good things to say on his basic theme of distancing oneself from the ego, but he repeats himself and often lapses into Stoic bromides (``Only the person you imagine yourself to be suffers''). In New Age fashion, Dyer draws on the wisdom of different religions without reference to their unique spiritual and metaphysical assumptions, as if they were all the same or the distinctions irrelevant, and he fails to defend and explain his main assertion that the higher self is somehow God. Practical, though unoriginal, insights for seekers. ($150,000 ad/promo; author tour)