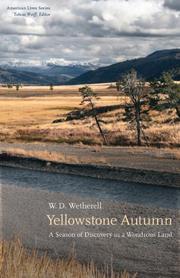 A Season of Discovery in a Wondrous Land

Meditations on the art of angling, mortality and more in one of those charged places where meditations come easily—Yellowstone National Park.

Yellowstone is now in the news for its disconcertingly rumbling volcanoes, but Wetherell (Soccer Dad: A Father, a Son, and a Magic Season, 2008, etc.) inclines to timelessness and the eternal verities, since he is confronting the specter of turning 55, “the real big 5-5, not the phony big 5-0 that I had passed in a breeze.” When a man of a certain leaning has to face such portentous moments, he does so with reel in hand. “For most people,” writes the author, “trout fishing is a much handier motive than philosophy.” That sentiment echoes Norman Maclean, the great philosopher of American rivers, but Wetherell does more than echo. He offers a refreshingly original set of observations on all manner of things, particularly the advance of years, which men are supposed to endure stoically and with mouths clamped shut. Echoes of Robert Bly and Iron John? Some, but there’s none of Bly’s touchy-feely, drum-circle squishiness here. Instead, Wetherell recommends that men of his age light out for the territory, as Roald Amundsen set off for the poles and, at 54, dreamed of traversing the Arctic in a zeppelin. Men of his age, arthritic but increasingly wise, are not supposed to spend much time staring into mirrors, Wetherell counsels, even though, as he notes in passing, Montaigne wisely said, “Old age plants more wrinkles in the mind than it does on the face.” Looking into a glassy trout stream makes for a seemly substitute. So Wetherell, pondering the history and meaning of wild Yellowstone, concludes that fishing is what matters in life, and ties on a “big Wooly Bugger and [plays] the chuck-and-duck game instead.”

A pleasure for men entering autumn, and for anyone who knows how to flick a line.