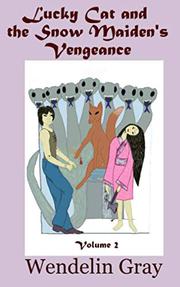 In this sequel, humanity remains controlled by three superstates, which come under attack from supernatural monsters.

In the author’s SF series opener (Kumori and the Lucky Cat, 2016), three powerful superstates arose after World War 3. In 2090, they find themselves opposed by statues, figurines, and dolls come to monstrous life. This second outing also includes events around 2090 but skips ahead to 2101 and backward to 2080. In 2101, a young lawyer from New Bangkok, the capital city of the Eurasia superstate, is sent to investigate irregularities at a detention camp, one of several built during the Reorganization to control people left in some “forbidden zones” considered dangerous, such as Japan. She finds a journal from 2090 noting the awakening of inanimate dolls and sculptures: “They are now more than just clay or stone or resin. Something else has entered them, using their empty forms to fight a secret war.” In 2090, Suna Hagiwara and her niece are resettled in New Bangkok, bringing with them a maneki-neko (beckoning cat statue), and Suna is drawn into the resistance Movement. Ten years before that, Suna’s sister, Yuki, is commissioned to make a special set of dolls. One of these, the Empress, enters the dreams of people in a sleep clinic that’s a front for the Movement, and Suna’s awakened maneki-neko promises to become clan guardian of the Hagiwaras. Gray (Magic Hair, 2019, etc.) has a nice control of the tone in these series installments, a delicate precision that helps balance the drama of dystopian fears and supernatural battles: “A barely whispered sigh so unearthly and gentle that it was almost imperceptible to human ears. Let this curse fall upon them.” Her characters are well developed and the worldbuilding feels solid. Things do still feel unresolved by the book’s ending, although the third volume may bring resolution. The jumps between time settings could become confusing, but the author helps readers out with an appended timeline as well as chapter headings with date and place to keep the audience oriented.

Another absorbing, entertaining entry in this one-of-a-kind SF series.