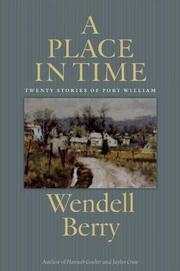 A PLACE IN TIME

The septuagenarian Berry makes a return visit to the genial farm community that much of his fiction has called home.

When Berry (Hannah Coulter, 2004, etc.) hasn’t been writing poetry or essays on farming life, he’s written fiction set in Port William, Ky., which rivals William Faulkner’s Yoknapatawpha County in terms of its breadth of imagined historical detail. These 20 new stories feature familiar characters from earlier novels and stories, but the reader needn’t have read those to get pleasure out of these. That said, the pleasures of this book are modest: Many of these stories are slight fables, flickering with only the slightest plot then softly ending, consistently well-drawn but not always memorable. One of the most potent stories, for instance, is markedly subtle: “A Desirable Woman” tracks the intersection of a pastor’s wife and a young farmhand shortly before the start of World War II, and the story turns on the young man’s unrequited crush on the woman shortly before he’s sent off to war. “Sold” has a similarly soft-focus, nostalgic cast, narrated by an elderly woman recalling the accumulations that are about to be sold at auction before she enters a nursing home. (The stories are arranged in the order of their chronological setting, from 1864 to 2008, but events largely cling to the WWII and postwar era.) The better, more energetic stories have the comic, homespun feel of tall tales, as in “A New Day,” which climaxes in a competition between two horse teams dragging bricks, or “A Burden,” about the antics of a drunk relation.

Berry is a maker of beautiful sentences, lightly touched with Southern dialect and soberly concerned with the future of the agrarian spirit. But Berry’s characters and tone alike feel muted.