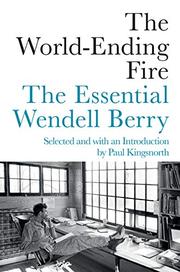 A pleasing selection of essays from the lifelong farmer and award-winning writer.

It’s a wonder that Berry (The Art of Loading Brush: New Agrarian Writings, 2017, etc.) gets any work done on his Kentucky farm given his prodigious literary output. He has written hundreds of essays, and English author Kingsnorth has carefully selected 31 of them, published from 1968 to 2011, to represent the “essential” Berry. Key words in the essay titles signal Berry’s ongoing concerns: nature, work, rugged individualism, citizenship, and agriculture. Throughout, he promotes caretaking, faith-keeping, kindness, and peace. In the introduction, Kingsnorth notes, “soil is the recurring image in these essays.” In 1989, Berry wrote, “we persist in land-use methods that reduce the potentially infinite power of soil fertility to a finite quantity, which we then proceed to waste as if it were an infinite quantity.” The author champions the “renewal of rural communities,” which must be accomplished “from the inside by the ancient rule of neighborliness, by the love of precious things, and by the wish to be at home.” In a fine piece on regional literature, Berry laments Twain’s conclusion to Huckleberry Finn, which “fails in failing to imagine a responsible, adult community life.” Instead, he pines for the “beloved community” of Sarah Orne Jewett’s The Country of the Pointed Firs. Berry also argues fiercely that “illiteracy is both a personal and a public danger.” Literacy, he writes, “is not an ornament, but a necessity.” Though the author is generally fairly somber, his 1987 essay explaining why he won’t buy a computer reveals a sly sense of humor: “If the use of a computer is a new idea, then a newer idea is not to use one.”

A great place to start for those who are not familiar with Berry’s work; for those who are, it will be a nostalgic stroll down a rural, wooded Memory Lane. In this day and age, his writings are must-reads.