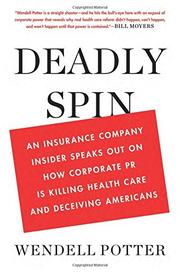 A former health-care PR executive blows the whistle on the industry.

Born in rural North Carolina to hardworking parents struggling through lean times, Center for Media and Democracy senior fellow Potter was the first in his family to earn a college degree, after which he became an investigative reporter at a Memphis newspaper. A gig as a political lobbyist led him into the public-relations field, where he accepted a prestigious position at managed-care behemoth Humana. In 1993, he signed on with CIGNA, a highly respected, for-profit health insurer, earning a six-figure salary as a senior PR executive. But as Potter ascended the corporate ranks, disillusionment became commonplace alongside the pressures to increase profitability at any cost while callously disregarding the basic principles of ethics. His conscience buckled. The author recalls working on an aggressive, exorbitant campaign (using health-plan premiums) to discredit filmmaker Michael Moore, whose 2007 documentary Sicko detailed the dire state of American health care. Potter experienced firsthand the destitute situations of those without health care when he visited a “clinic day” on public fairgrounds in Virginia. The author backs up his claims with historical perspectives, industry dissection, consumer profiles and the hard evidence of documented Congressional investigations. He now considers the insurance industry “an evil system built and sustained on greed”—an opinion he maintained after being asked to testify on behalf of an investigation spearheaded by Democratic senator Jay Rockefeller. Potter officially addressed the U.S. Senate on June 24, 2009, exposing the “spin machine” used by companies like CIGNA to confuse unsuspecting consumers. The author concludes optimistically with the passage of President Obama’s Patient Protection and Affordable Care Act of 2010, which he considers a positive, proactive leap toward health-care reform.

An illuminating, up-to-the-minute testimonial sure to garner widespread attention and controversy.