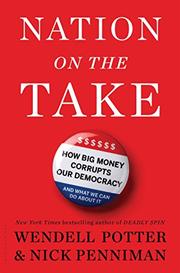 NATION ON THE TAKE

An examination of how “the rapid proliferation of a system akin to oligarchy—within our own country—threatens to cripple our march forward.”

Center for Public Integrity senior analyst Potter (Obamacare? What’s in It for Me, 2013, etc.) and Issue One executive director Penniman cite historical and current incidents of America’s “coin-operated government” and its outsized influence on legislation. Money dominates the political system as it muzzles more Americans than it empowers. The authors especially point to the election of 1896, in which businessman Marcus Hanna bankrolled William McKinley’s campaign “almost entirely with his own money.” That election recorded, as a percentage of GDP, the largest spending levels ever, before or since. With a ray of hope, the authors point out that Theodore Roosevelt’s administration turned the tables on corporate spending. Later, the Tillman Act of 1907 and the Hatch Act of 1939 tried to limit campaign activity and contributions. The Taft Hartley Act of 1943 banned direct spending by unions and corporations, which led to the creation of the first PACs. The authors pull no punches regarding the “corrupting influence” of the Citizens United decision, and they succinctly and clearly expose the direct influence of lobbyists for such industries as banking, mortgages, oil and other fossil fuels, pharmaceuticals, coal, and even food and beverages. Lobbyists demand self-regulation, threaten job losses if they have too many rules, and encourage delaying tactics in Congress. Thankfully, Potter and Penniman offer practical answers and point out that reform beginning at the local level is most effective and that “sunlight is the baseline for all reform.” As they note, the underfunded and dysfunctional Federal Election Commission, the IRS, the president, and the Securities and Exchange Commission all have tools to help, but they have to use them.

The authors are necessarily forceful, and they offer a well-written must-read for those ready to give up hope about politics and government in the United States.