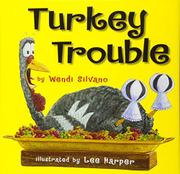 From the Turkey Trouble series

by Wendi Silvano and illustrated by Lee Harper

Turkey’s in the “kind of trouble where it’s almost Thanksgiving...and you’re the main course.” Accordingly, Turkey tries on disguise after disguise, from horse to cow to pig to sheep, at each iteration being told that he looks nothing like the animal he’s trying to mimic (which is quite true, as Harper’s quirky watercolors make crystal clear). He desperately squeezes a red rubber glove onto his head to pass as a rooster, only to overhear the farmer suggest a poultry plan B when he’s unable to turn up the turkey. Turkey’s horrified expression as he stands among the peppers and tomatoes—in November? Chalk it up to artistic license—is priceless, but his surroundings give him an idea. Good fun, but it may lead to a vegetarian table or two. (Picture book. 4-8)