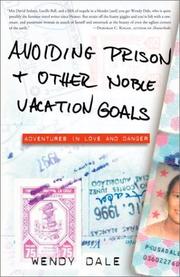 Adventures in Love and Danger

Television writer Dale whips up a lightweight tale of travel and romance in daunting locales.

After a dutiful, dull youth and a disillusioning first job as a corporate newsletter writer, the author concluded, “I had tried life on, but had yet to grow into it. My life had been a triple-A training bra.” Determined to avoid the fate of her joyless middle-aged colleagues at Hughes Aircraft and inspired by her free-spirited parents’ sudden move to a farm in Honduras, she embarked upon a less responsible, more adventurous course. Initial journeys to Lebanon and Cuba whetted her appetite for experience: “After Beirut, everything around me seemed so trivial.” She got more than she bargained for with two Costa Rican romances, the first with Michel, who was arrested for defrauding her and others, the second with Francisco, a luckless Colombian national who was imprisoned due to trumped-up accusations by his estranged wife. Dale impulsively moved to Costa Rica to be near Francisco, only to find his legal situation worsening. After a nine-month struggle, her efforts aided Francisco at trial; they fled Costa Rica for Panama, Colombia, and further complications, including a scary period of destitution, and Francisco’s eventual betrayal. Dale portrays Central America with colorful generalities, captures the luckless milieu of its prisons, and writes sympathetically about the ordinary people she encountered as her journey grew rockier. Like many television writers moving into books, she hews to a style best described as Mass-Cult American: casually chatty, sprinkled with snide asides, vague sex talk, and inevitable pop-culture references. Her determinedly airy, chipper tone ultimately becomes problematic, since she treats everything she experiences and sees, no matter how grave, as material for sitcom-like riffing. She’s also much too focused on her own woes, as witness this characteristic observation upon seeing the Panama Canal: “How easy it must be to be a ship’s captain, I thought to myself.”