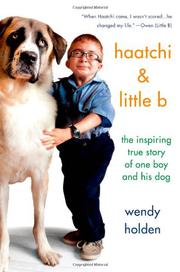 The Inspiring True Story of One Boy and His Dog

A boy and his dog, finding new ways to encourage each other past their limitations.

We haven’t quite reached the point where bookstores have their own section for print versions of YouTube videos, but with hours of video being uploaded every second, there’s certainly no shortage of source material. While many videos become popular for esoteric reasons bewildering to anyone over the age of 20, some touch on a desire to see pockets of goodness in a world beset with bad news. One such video, viewed more than 2 million times, reminds us of the power of the connection between pets and people. Owen was an 8-year-old boy with a rare genetic disorder in which muscles are unable to relax after they contract. This can result in near paralysis, with muscles constantly overworked and difficult to control. Haatchi was an Anatolian dog named after a famous Japanese dog that returned to the same train station stop for years after his master had died, waiting for his master to disembark from the train. In January 2012, Haatchi was hit over the head and left to die on a train track; the train took one of his legs and most of his tail, but he managed to survive. His limitations made it difficult for him to interact with other dogs; Owen’s challenges made almost everything difficult for him. Together, they have been able to push past physical limitations to find new strength and satisfaction. Holden (Gifted and Talented, 2012, etc.) does an adequate job fleshing out the details of Owen’s treatments and Haatchi’s gradual ability to trust humans again, but she provides too much detail about the fame that Owen and Haatchi have found—e.g., receiving awards, giving a signature to Queen guitarist Brian May, etc.

A serviceable story of inspiration and the love between a boy and his pet.