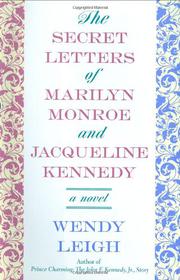 THE SECRET LETTERS OF MARILYN MONROE AND JACQUELINE KENNEDY

Leigh’s off-the-wall inspiration works largely because she captures the writing voices of these two icons almost pitch-perfectly in nearly every sentence (though Jackie makes a comment or two we might doubt). The correspondence opens way back at the start of Marilyn’s career, just as Jackie marries Jack, who has already bedded the starlet. That’s in 1953: Jack is fresh and young, but both women are even younger (Marilyn by nine years, Jackie by twelve) and have father-hungers for the charismatic senator from Massachusetts. Jackie had libidinous chats with her own dad about his philandering, while orphaned Marilyn never lived with her father but fixated on Clark Gable, kissing a bedside photo of him throughout childhood. The author slyly leads us into the correspondence with letters from Patrice (Patty) Renoir, who was given the whole batch in a sealed Max Factor box a week before Marilyn died. Patty gave Marilyn Brazilian wax jobs on her pubic hair each time she had a tryst coming up with Jack (known to Patty only as “Mr. G.”) because he loved the prepubescent little-girl look. Throughout the correspondence, Leigh peppers each outstanding event or fact with footnotes from the vast Marilyn/Jackie literature, inventing an occasional gossipy confidant or stolidly solemn reference work. The footnotes give the novel a weird reality and make it the best fictional realization of Marilyn since Sam Toperoff’s dead-on Queen of Desire (1992), with impressive sexual understanding.