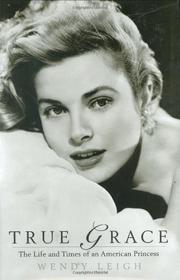 The Life and Death of an American Princess

Gossipy biography of Her Serene Highness.

Setting to work on a biography of Grace Kelly, Leigh (The Secret Letters of Marilyn Monroe and Jacqueline Kennedy, 2003, etc.) was advised by her editor, “I don’t want anything warmed over.” By that criterion, her results are decidedly mixed. In broad outline, Leigh’s version offers little that departs from the themes of nine other Kelly biographies and several books that consider her in passing. Here again we see Kelly obsessed with becoming a star. “She was,” a friend recalls, “like a Patton tank on her way to somewhere.” Kelly threatened to break a long-term contract at MGM if the studio refused to loan her to Paramount to play a plum role in The Country Girl. Metro relented and Kelly copped an Oscar for her performance. Leigh also follows other biographers to the bedrooms where Kelly walked in, stripped naked, then pursued an affair, often with a considerably older co-star (Gary Cooper, William Holden, Frank Sinatra, et al.). Kelly’s storybook marriage to Prince Rainier had scant effect on her promiscuity. The union, which sprang from a public-relations move to polish Monaco’s faded image, soon left Princess Grace lonely; she diverted herself, as her husband did, with affairs. Leigh does bring a fresh perspective to Kelly’s acting, especially in a favorable critique of Kelly’s underrated work in High Noon. To a narrative highlighting sleeping arrangements, Leigh adds to what has already been reported about Kelly’s prodigious sex life the news that she slept with Tony Curtis. The author also devotes an entire chapter to the question of whether Kelly’s affair with David Niven was short- or long-term.

What lay beneath the compulsions? Leigh never gets beyond the surface of Kelly’s need to please a distant, philandering father.