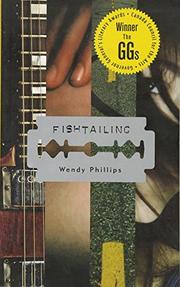 Four teens fall in and out of longing, love and violence: Kyle, the motorcycle-riding musician, Miguel, the unpredictable poet haunted by a violent past, Natalie, a mischief-making cutter, and Tricia, a biracial teen uncomfortable in her own skin. Told in minimalist free-verse vignettes, their lives crash, simmer and smolder together in the science lab, on the soccer field, at the coffee house and more.  Phillips adeptly spins complex, provocative, sharp-imaged lines of poetry in this first novel that is mostly told by the four main characters with some well-intended but pandering commentary by the school faculty, including their English teacher, who assigned them to write many of the poems for class. Though fully realized in structure, tonality and word choice, several poems lack voice, particularly those written by male characters. Readers can identify the speaker because the author has assigned names to stanzas, but any sense that the characters could be living, breathing, talking teenagers stops there. However, although much of the climatic action happens offstage, there are enough razor blades, lust, jealousy and revenge to keep readers breathlessly hooked until the very end. (Verse novel. 14 & up)