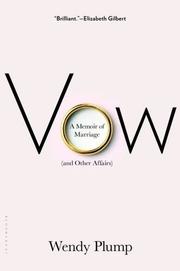 A Memoir of Marriage and Infidelity

A woman's account of discovering her husband of 18 years had a second family and her confessions of her own affairs.

Freelance reporter Plump opens her book with an epigraph by W.H. Auden: "Hunger allows no choice." She then goes on to describe the terrible choices she and her husband, Bill, made for the duration of their union. In 2005, a close friend of Plump's disclosed to her that Bill had another house nearby, and he often stayed there with a girlfriend Plump didn't know existed. The most gutting news was that Bill and his mistress, Susan, shared an 8-month-old baby. When confronted, Bill offered confirmation but no explanation. Partly for the sake of their two sons, the author tried to save her marriage despite Bill's repeated lies about having ended his affair. As Bill, who traveled frequently for business, evaded his wife, Plump pieced together the timeline of his infidelity (it started 10 years earlier) and communicated with Susan. She writes candidly about her own indiscretions, recounting details about each of her three affairs. She began cheating on Bill during their first year of marriage. "Romanticizing adultery seems an unfair thing to do," she writes, "but the truth is that it can be transformational on every level." She finally separated from Bill after his duplicity became unbearable. In the final third of the book, the author examines the differences between having an affair and being the victim of adultery. Readers may vacillate between finding Plump's behavior indefensible and feeling sympathetic toward her.

Voyeuristic and base but surprisingly engaging.