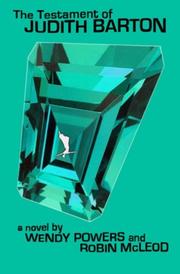 THE TESTAMENT OF JUDITH BARTON

Last time the world heard from Judy Barton she was tumbling out of the bell tower at Mission San Juan Bautista to her death, but it turns out the ethereal beauty of Alfred Hitchcock’s 1958 masterpiece Vertigo has more to say.

Barton is telling her own tale this time around, and she’s just as frustratingly enigmatic as she ever was in the movies—but that turns out to be a good thing. Initially, the flat, first-person narrative feels bogged down in the banality of Barton’s pre-San Francisco existence. The years she spends growing up in America’s heartland in a picture-perfect nuclear family carry the verisimilitude of tranquility, and tragedy is a foregone conclusion. It takes a while to escape it all (or is that merely subterfuge, à la Alfred?), and there are layers of chaos roiling just below the calm, much like the Hitchcock classic itself. Authors Powers and McLeod have a lot to say about the suppression of women during America’s “Happy Days,” and they do so quite deftly. The plot picks up in the final third of the book as Barton’s date with the bell tower looms, and she’s revealed as the most fantastic cipher—most tragically to herself, and all but oblivious to the deepening depths of her own anger and desolation. All of which, sadly, makes her the perfect pigeon for Gavin Elster’s elaborate machinations to murder his wife and make it look like suicide. The authors could have easily used numerous inside references to the cinematic Vertigo but instead show restraint. (A Jake “Stewart” posing as a disappointing love interest for Barton shows up suspiciously at one point, but that’s about it.) Ultimately, this is a serious work. Barton doesn’t acquit herself a half century after her fatal plunge, but she does spread the blame around to where it belongs.   A multifaceted journey for devotees of Vertigo to contemplate and enjoy.