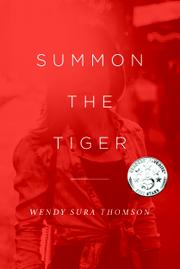 A debut author chronicles a life spent overcoming family and physical problems, from her childhood in Michigan through her retirement from a notable career at General Motors.

Thomson seemed to know from an early age that she was special. She understood things quicker than her fellow students and she was willing to stand up for herself. These were helpful traits for a girl growing up with a set of fused fingers, a deformed arm, a prosthetic leg, an abusive mother, and an alcoholic father. Her intelligence and determination helped her overcome her social awkwardness and a number of adversities. She left behind her full scholarship to Michigan State University to work on the family freighter. Her adventures included facing a fierce winter storm in the Atlantic and witnessing ocean wonders (“Off the coast of Maryland, I went aft one night and saw phosphorescent algae churned up from the prop off the stern. It was magical—mesmerizing”). Later, she saw the dissolution of her family in Florida. She then bounced around the country, working different jobs before catching on at General Motors and breaking new ground for women in its financial sector. She balanced a booming career, a troublesome marriage, and continuing medical problems. Thomson has a talent for vividly describing a setting—she can remember the furniture in a house, the interior of the family car, and the route she walked to school. But this ability doesn’t extend to the more salient details that would pull a memoir together. The book, which features a few photos, often reads more like a list of events than an exploration of an incredible life. It lacks the particulars that would put readers in the scene and allow them to see what’s happening and feel the weight of it. When recounting her parents’ troubles, she writes: “My parents were gone for a while, replaced by a very stern and unpleasant white-uniformed-with-cap nurse.” They eventually returned, but there is no information about how this happened, the children’s reaction when they first met the nurse, or anything that passed between them.

An intriguing but uneven account of a remarkable woman triumphing over adversity.