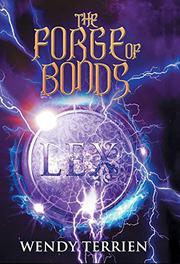 THE FORGE OF BONDS

Two teenagers’ friendship becomes tested while they hone their abilities in this third installment of a paranormal fantasy series.

Fourteen-year-olds Sadie Callahan and Jason Lex have special powers. Sadie is a Yowie (the Australian cousin of America’s Bigfoot) and can shift between human and animal form. Her Yowie heritage also enables her to heal quickly and turn invisible, although she’s yet to master this. Jason is a Rampart Guard, a fire-wielding warden of the barrier that keeps cryptids (Yowies, Yetis, etc.) hidden in the human world. Both Sadie and Jason are in training; whereas he embraces the changes he’s going through, she is less keen. Sadie has been chosen to lead the Yowies, but until she’s ready to face the current leader—the nefarious Garrison Devine—she remains in hiding and can pretend to live a normal life. This head-in-the-sand approach comes unstuck when a stray Bigfoot is seen around town. Sadie and Jason track it down, but when the Bigfoot turns out to be a Yowie—the same one that killed Sadie’s grandma—and Jason refuses to kill it, their bond of friendship is threatened. Will Sadie ever forgive him? And how will she cope when her mother, who everyone thought was killed when Sadie was a baby, comes back into her life? Terrien (The Clan Calling, 2017, etc.) writes in the third person, mixing narrative descriptions and dialogue to good effect. The teens and adults all have their quirks, but readers new to the series may struggle to keep track of the relationships. There are many characters and they’re all a bit similar (in the sense that they remain good-natured and talk through their issues, even when there’s friction). The plot, likewise, is very much a continuation of previous volumes. The complicated backstory goes largely unexplained, and the progression of the big picture is minimal. But while the current installment feels almost as if it’s treading water, its true beauty lies in the protagonists’ growth and the way they deal with ordinary teen issues (of which there are many). Rather than dazzle readers with big developments, the author anchors the paranormal elements and invites teens and adults alike to feel part of Sadie and Jason’s extended family.

A safe, cozy adventure built on the solid foundations of everyday life and uncommon imagination.