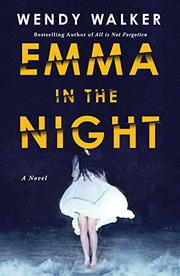 EMMA IN THE NIGHT

A tense thriller explores the bond between sisters and family dynamics that give new meaning to the term “dysfunctional.”

Three years ago, 17-year-old Emma Tanner and her 15-year-old sister, Cassandra, left home, disappearing into the night; as Walker's (All Is Not Forgotten, 2016, etc.) book opens, Cass shows up at her family’s house—without Emma. Dr. Abby Walker of the FBI, a forensic psychiatrist who’s been on the case from the beginning, is desperate to find out what happened and to find Emma before it’s too late. Cass tells Abby she and Emma had been arguing the night they took off and that it soon became obvious that Emma was packing up to leave. Cass, hoping to get her sister in trouble, hid in the car when Emma drove off, heading to the beach, where she was met by a man and woman Cass didn't recognize. When Cass revealed herself, they decided to take her with them as they left for a remote island off the coast of Maine. Emma was pregnant, Cass says, and the couple had offered to help her, but what they really had planned was to keep the baby for themselves. Cass finally managed to escape, she says, but without Emma. It’s a harrowing tale, and Cass says all she wants is to find Emma, but Abby suspects she's hiding something. Cass’ first-person narrative, interspersed with Abby’s investigation, paints a shocking picture of Cass’ ordeal and her family’s disturbing history. Her mother, Judy Martin, has always used her beauty and charm to manipulate her family, and her girls had to flatter her to win her affection. She was jealous of the attention given to her beautiful daughters, which threatened her fragile ego, and she was always scheming to get what she wanted—even seducing her stepson, Hunter, who was obsessed with Emma. Cass is a survivor, forced to become an adult very quickly, and readers will root for her as she tells her disturbing story and looks back on what could have been, when hope was all she and Emma had.

This thriller aims right for the heart and never lets go.