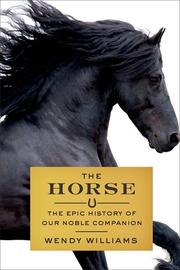 The Epic History of Our Noble Companion

An enthusiastic history of and appreciation for all things horse.

In this “scientific travelogue…biography of the horse…and worldwide investigation into the bond that unites horses and humans,” one of the only elements Williams (Kraken: The Curious, Exciting, and Slightly Disturbing Science of Squid, 2011, etc.) doesn’t address is how to ride a horse. But there’s more than enough to teach readers how to approach a horse and how it will communicate its feelings. The author begins by asserting that horses had their beginnings in the New World rather than the long-held belief that Europeans introduced them to the Americas. When the land bridges were available, horses could travel through Asia to Europe, and Williams notes that horses are not only herd animals, but that they don’t stray far from their environments. As she traces their evolution, she makes it clear that horses tend to adapt to their surroundings rather than move away in search of comfort. The evolution of their hooves, from three to four toes, was caused by the change from marshy ground, where toes helped balance, to dry grass plains. In an equally thorough manner, Williams explains the changes to the animals’ eyes and teeth, which changed with their diet as grasslands formed and they required teeth that could grind effectively. Horses are also red-green colorblind because their eyes only have two types of cones, whereas humans have three. That, as well as the placement of their eyes, affects their acuity and depth perception. The author also explores how horses’ eyes moved back in their heads, allowing wider vision. This made room for larger teeth, which evolved to adapt to the grass that appeared due to changes in global temperatures caused by tectonic plate movement and changing ocean currents.

Anyone with a love of horses will treasure this book, which provides scholarly yet accessible insight into a beautifully constructed animal that has chosen to domesticate man, just as dogs have.