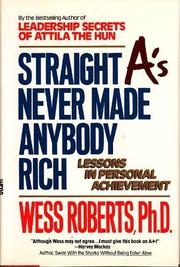 STRAIGHT A'S NEVER MADE ANYBODY RICH

Roberts seems to have lost the fine sardonic edge that made his Leadership Secrets of Attila the Hun (1989) a diverting bit of comic relief. Even more disappointing for readers in search of tongue-in-cheek insights, the author has turned deadly earnest, poaching on preachy preserves overcrowded by the likes of Robert Fulghum and Og Mandino. This time around, Roberts is bent on attesting to the rewards (psychic and otherwise) of living up to one's full potential. To this end, he combines straw-man case studies with cautionary tales drawn from a welter of oddly coupled sourcesthe Bible, Cervantes, classical mythology, Dickens, etc. With appreciably more piety than wit, he then offers capsule commentaries on the lessons to be learned. After recounting the unhappy fates of Narcissus and an upwardly mobile MBA cursed with a baseless sense of infallibility, for example, Roberts solemnly warns that false pride has pitfalls. Without apparent embarrassment, he also reminds slow learners: ``There is more to success and happiness than simply acquiring skills and knowledge.'' Nor, despite his test's suggestive title, does Roberts set great store by either fortune or fame as a benchmark of achievement; report cards, he argues along similar lines, are equally unreliable measures of academic excellence. Roberts gets off a few sallies, including the injunction to resist trying to get more out of an experience than circumstances warrant. In the main, however, his do-the-right-thing counsel consists of advisories that are either self-evident or so much syrupy twaddle. Late bloomers, ugly ducklings, and other of life's presumptive also-rans should probably wait for Rasputin's Complete Guide to Self-Realization.