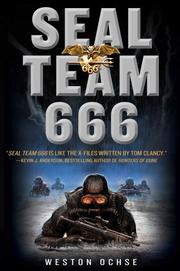 Jack Walker, a young cadet in training for the Navy SEALs, was possessed by a "grave demon" while growing up in the Philippines. Drafted into SEAL Team 666, a secret special ops unit that fights demons, monsters and ghosts, he is uniquely equipped to thwart an evil threat from Myanmar poised to wreak havoc on the world.

SEAL Team 6, the real-life elite team that killed Osama bin Laden, has never seen the kinds of things that confront its fictional counterpart. Walker has barely settled into his new role when a spiked, six-legged beast—it takes an epic round of gunfire to bring down—surprises him and his four partners. The SEALs soon confront golemlike homunculus creatures, which run amok, appearing and disappearing, intent on plucking out and devouring its victims' intestines. The scariest creature is politically rooted, summoning ancient curses to empower a separatist movement in Myanmar. To thwart his wicked opponent, Walker must overcome the fugue states he enters into when his old demons act up. (A Navy brat, he was cursed by a witch doctor mad at his father for selling supplies on the black market.) He gets help from the squad's intrepid dog, which has unique skills of its own. Ochse, credited as an intelligence officer for the Defense Intelligence Agency, won a Bram Stoker Award for his first novel, Scarecrow Gods (2005). He brings both a lively gallows humor to the story and just the right amount of conviction to make his scenarios as creepy as they are cartoonish.

May not be for fans of realism-soaked military fiction, but it will leave fans of a woolier kind of combat tale looking forward to future installments.