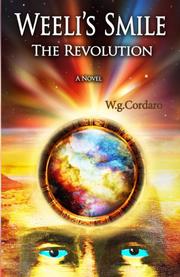 Herb, the novel’s narrator, entered corporate America at 22 after serving in the U.S. Army and rose rapidly up the ranks of Massachusetts-based candy manufacturer Entipop. He’s frustrated by his “gray” existence, but when he meets fellow employee Weeli at an executive meeting, he immediately recognizes him as a kindred spirit. Both men were raised in nearby Brockton, although Weeli comes from a wealthier background. The two begin drinking together and “slowly turn each other on to The Revolution.” “The Revolution” is an amorphous term, as they use it, but it involves a rejection of capitalism and a voyage of self-discovery. Shortly after Herb learns that an old Army buddy has been killed by friendly fire, Weeli calls and unexpectedly suggests a vacation. Lured by his friend’s “sexy tales of Big Sky Country adventures, peyote, and Revolution,” Herb accepts, and they catch a plane with an aim to explore the “big American West.” Their spiritual journey is a largely predictable one, involving using peyote in the Utah desert and feeling a connection to the American landscape. The novel initially promises to be a thought-provoking collision of Douglas Coupland’s 2006 novel JPod, about dissatisfied office-cubicle workers, and the psychotropic experiences of Ken Kesey’s Merry Pranksters. W.g.Cordaro’s dialogue is amusingly effective, juxtaposing office geek-speak (“He…didn’t know the difference between the old mainframe green screen technologies and the new Phairyway DB2 GUI-based applications”) with crude, stoner-esque philosophy (“finger-fuck life ’till she’s finger-licking good, you hear me?”). The author also has an eye for detail but has a tendency to overdescribe. For instance, he spends a wearisome three paragraphs detailing Herb’s “mouth-mangling” habit of chewing tobacco. Regular digressions along with poetry quotations, biblical excerpts, Freudian theory, and statistics make for a sprawling novel with a plot that’s difficult to follow. It feels entrenched in 1960s counterculture, but its philosophy seems somewhat outmoded when applied to contemporary society.

A laborious regurgitation of old ideas about spiritual revolution.