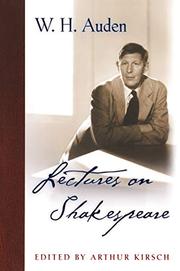 Lectures on Shakespeare delivered by British poet and critic Auden in 1946 at the New School for Social Research in New York, carefully reconstructed by Kirsch from students’ notes.

While Auden provides a thorough scholarly interpretation of Shakespeare’s works in chronological order, he also takes every opportunity to discuss them in a much broader historical and cultural context. He shares his impressions of American society, draws parallels between Richard III and Hitler, and quotes profusely from a wide range of writers and philosophers (including Dante, Eliot, and Kierkegaard). The Merchant of Venice provokes his evaluation of Elizabethan anti-Semitism (which, according to Auden, was less racial than xenophobic). In connection with As You Like It, Auden speaks of pastoral conventions, drawing on Hesiod, Virgil, Rousseau, and contemporary literary theory. He does not hesitate to voice extremely critical opinions: He declares The Taming of the Shrew a complete failure, dismisses Twelfth Night as an “unpleasant play,” and declares The Merry Wives of Windsor to be “dull” (proposing that his students listen to Verdi’s Falstaff rather than read the play that inspired it). Auden also finds fault with Hamlet: He believes that Hamlet’s boredom compels him to act theatrically, and he suggests that the play was written out of spite against actors. However, as Auden repeatedly emphasizes, only minor poets are always technically perfect, because they always tread upon familiar ground. The true genius, who explores new forms of expression as a matter of course, inevitably risks failure. Shakespeare received his training with chronicle plays, and he drew important lessons from history concerning the interdependence of characters and situations. He withstood the test of artistic freedom, creating his plays against the ill-defined and amorphous conventions of Elizabethan drama. And, most important of all, his themes are so universal that his plays can appeal to general audiences even today.

Overcoming the temptation to create his own Shakespeare, Auden penetrates to the very core of Shakespeare’s originality, expressing himself in crystalline analytical prose.