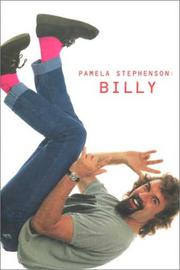 Clinical psychologist and former comedian Stephenson balances wifely affection with professional analysis in her biography of Billy Connolly, who survived abandonment as well as physical and sexual abuse to become a noted musician, comedian, and actor.

The narrative alternates between the couple’s current life in Los Angeles and Billy’s early years in Glasgow, where he was born in 1942 as his father was about to leave for the battlefields of Burma. The Connollys were Catholics who had left Ireland to make a better life in Scotland, but they still could only afford a squalid tenement apartment with two rooms and a communal washroom. When Billy was three and older sister Florence not yet five, their mother walked out, leaving the kids alone in a cold apartment without food. His father’s two unmarried sisters eventually took them in, but one of the aunts regularly beat and belittled Billy. Things only got worse when his father came back from the war and began sexually abusing the boy. School was no better; teachers were free with physical punishment and verbal abuse. In his teens, Billy began playing the banjo and singing and eventually left his job as a welder at the Clyde shipyards. He overcame a horrendous childhood to become famous, first in Scotland as a musician and comic, then in London, and now in the US. As Stephenson notes, “Billy’s real story is an utterly triumphant one.” Known for his outrageous wit and costumes, he initially had difficulty coping with fame. His first marriage failed, he took drugs and drank heavily. Stephenson, who met him while she was acting on British TV, details all the low moments as well as the highs: his doctorate from Glasgow University in 2001, his acclaimed role in the movie Mrs. Brown, and his friendships with stars like Judi Dench, Michael Caine, and Dustin Hoffman.

A loving case study, meticulously researched, best on the early years before the accolades began to accumulate.