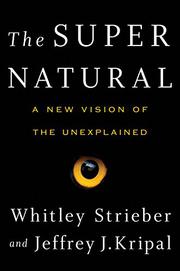 A New Vision of the Unexplained

A religious historian and a popular fiction writer and mystic collaborate to adopt unexplained phenomena into the realm of natural occurrences.

Best known for his graphic depictions of alien abductions and otherworldly encounters (his own included), Strieber (Solving the Communion Enigma: What Is to Come, 2012, etc.) pairs up with Kripal (Religion/Rice Univ.; Comparing Religions, 2014, etc.) to produce a cohesive reframing of the “pantheon of the unknown” through the lens of the natural world. To accomplish their “apocalypse of thought,” both authors worked in tandem, intertwining their unique perspectives, experiences, and educational backgrounds. They explore Strieber’s legacy, the development of alien folklore, and the logical debate on how the American government’s skepticism and secrecy surrounding UFOs only propagates their mythological potential. Kripal’s broad religious comparisons and his intellectualization of unknown phenomena from a spiritual perspective complement Strieber’s menacing laundry list of what haunts him most, from his many sinister encounters with nonhuman entities to a medically mystifying, nonremovable ear implant, a beautiful ghostly temptress, and gargantuan pulsating spiders hovering above his bed. Appealing to his already established readership, these unsettling anecdotes indeed make this a Strieber book, but Kripal’s religious assessment of sex and gender is similarly provocative. Lucid and convincing, the writers’ volleying hypothetical interpretations of how “to embrace science in a new way” implore that it’s not necessary to believe in the supernatural in order to study it and to comprehend its validity or its possibilities or impossibilities, yet much work remains to elevate it beyond perpetual public mockery. Though Kripal implores that “we are all embedded in a much larger, fiercely alive and richly conscious reality,” perhaps the best counsel for dogmatic debunkers can be found in the book’s appendix, which kindly suggests that everyone patiently “learn to live with paradox, to sit with the question.”