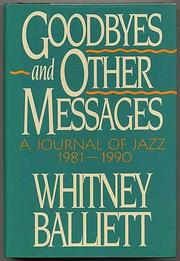 GOODBYES AND OTHER MESSAGES

A fine 14th book from Balliett (Bradley, Barney and Max, 1989, etc.)—taken, like many others, from his New Yorker jazz column- -that is, he suggests, his farewell jazz hard-cover. And the pages overflow with goodbyes to great jazzmen who have died, many in the past decade, with genial elegies for Duke Ellington, Ben Webster, Roy Eldridge, Benny Goodman, Thelonius Monk, Count Basie, Earl Hines, Sarah Vaughan, and Bill Evans. Balliett also reviews Gunther Schuller's The Swing Era and James Lincoln Collier's Duke Ellington and Louis Armstrong bios. Collier does not get high marks for either of his books; the Armstrong bio is faulted for not covering Pops's big-band Decca years and for not breathing life into him through lively interviews on hand from his friends and sidemen, and the Ellington bio for dismissing the Duke's later concert pieces. Balliett thinks that ``It is unlikely that anyone will write a good biography of Duke Ellington.'' Nicely handled here is electrifying trumpeter Bunny Berrigan, whose virtuosic agility has never been more aptly limned in words. Also well examined are hornplayers Warren Vache, Rex Stewart, Jabbo Smith, Dizzy Gillespie, Bill Coleman, Cootie Williams, and Wynton Marsalis. Miles Davis is given a stiff rap on the forebrain for hiding in heavy metal and forgoing his genius. Ol' Blue Eyes's package of 83 songs recorded with the Dorsey band is called largely inert, with only a handful of livelier, more choice ballads singled out for praise. Love for swing drummers Big Sid Catlett and Buddy Rich sings off the page, with their every rim shot, press roll, cymbal smash, or snare whisper itemized and weighed for color. If this is it, Balliett leaves in top form and we are all in his debt.