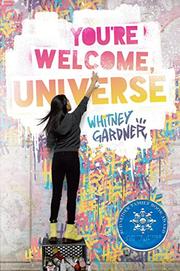 A deaf, Indian-American teen with a flair for graffiti learns how to make her mark.

With two deaf moms, a deaf school, and Jordyn, her deaf best friend, Julia Prasad has always been unapologetically deaf. But when she paints graffiti over a slur about Jordyn and is expelled, she's thrust into the chaos of mainstream high school with a patronizing interpreter, clueless teachers, and persistent bullying. Spoken dialogue is broken by blank lines, representing the words she realistically can't lip-read. Graffiti, despite its illegality, is her only outlet besides art class. Julia's cynical wit is augmented by illustrations of her work, which reveals the parts of her personality that English and her rebellious exterior can't express. ASL signs emphasize her points. When she discovers that her work is being altered, she enters a risky graffiti war as she looks for the culprit. Meanwhile, she befriends "Yoga Pants," an overeager white girl, in spite of herself. Several red herrings later, the culprit forces her to evaluate the differences between art and vandalism and between listening and hearing. Eating disorders, racism, and homophobia are mentioned in passing. In scenes that smack of wish fulfillment, iconic street artist Banksy makes a cameo appearance.