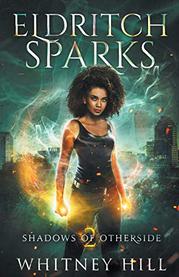 From the Shadows of Otherside series, volume 2

The second installment of Hill’s urban-fantasy series pits its air-spirit private detective against a plot to raise the dead.

Arden Finch is a sylph—an elemental born of an elf and a djinni. For her first 25 years, her djinn relatives taught her to hide her powers. Elves consider sylphs abominations, and most would kill her on sight. After the events of Elemental (2020), however, Arden has gained the begrudging protection of House Monteague, the leading elven family. She’s now a neutral party in the squabbles and maneuverings of Otherside—an umbrella term for the disparate cliques of supernatural creatures who lead double lives among North Carolina’s human population. Arden may have found a bit of acceptance, but her happiness is short-lived, as Otherside is in imminent danger of being revealed to the humans. Before that happens, Arden needs to forge an alliance among the elves, vampires, werewolves, djinn, and others. But her werewolf boyfriend, Roman, keeps taking actions behind her back; the Monteague princess Evangeline wants her dead; and sultry vampire Maria is determined to seduce her. Worst of all, Arden’s latest investigation in the human world—into bodies stolen from the local morgue—leads her to suspect that a lich lord has risen and is building a zombie army. Can Arden ward off both death and disaster? Hill employs a pulp-noir style with modern-day verve and attitude, and Arden has a bit of a Jessica Jones vibe. As a supernatural being passing as a mixed-race human, she’s keenly aware of contemporary minority rights movements, and her fortitude in Otherside dealings resonates strongly with analogous struggles in the real world. But although Hill’s worldbuilding will draw the reader in, it’s the strong-willed, hard-boiled protagonist who will keep them engaged, as Arden’s narration ties the speculative elements together and brings a sense of simmering urgency to the proceedings. One minor criticism is that Hill’s prose occasionally hurries along a bit too quickly, but it won’t stop readers from finishing the book in one sitting.

A compelling book of Otherside that goes from strength to strength.