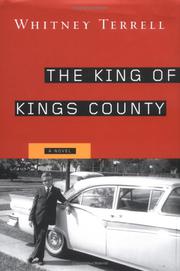 THE KING OF KINGS COUNTY

Terrell (The Huntsman, 2001) returns with a powerful story about the birth of the suburbs and the death of the American dream.

Jack Acheson is a quietly observant kid, and if he’s wise beyond his years, it’s because he’s blessed—or cursed—with a father who refuses to treat him like a child. Privy to the outsized dreams and underhanded dealings of Alton Acheson, Jack becomes his father’s chronicler. His story begins with the birth of the Interstate Highway in the 1950s, and it spans the last decades of the 20th century. A student of Gilded Age titans, Alton has special regard for Thomas Durant, the man who built the Transcontinental Railroad and—more importantly—purchased the land aongside it. When he sees his own chance for greatness in the new highway, he forms an alliance with revered Kansas City developer Prudential Bowen to buy Kings County farmland on the cheap and turn it into luxury housing and shopping centers for the new American commuter. Alton is a confidence man par excellence—a brilliant huckster and an individual with absolute faith in himself. A big man with long, blond hair and a fondness for pastel suits, Alton is a blithely conspicuous loudmouth and a constant source of mortification for his adolescent son. He’s also a spectacularly appealing character, able to turn nearly everyone around him—his son, his wife, his friends—into willing (if occasionally uneasy) accomplices. A clear-eyed visionary, Alton not only anticipates school desegregation and white flight, he depends on it. The fatal flaw in his scheme is not his amoral calculation, but his miscalculation: By the time bussing comes to Kansas City, Alton’s already been forced to trade his rich suburban acres for tenement buildings in a dying metropolis. An honest and unsentimental post mortem for America’s cities, this is also a moving and original coming-of-age story.

A grand work of fiction, epic in scope and intimate in detail.