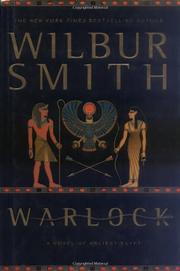 Third appearance of Taita, the witty but enigmatic polymath eunuch who narrated River God (1994) and reappeared largely on a 4,000-year-old papyrus scroll in The Seventh Scroll (1995). Smith’s bloody actioners most often dwell on Africa’s lower regions, but he also has a sweet tooth for Egyptology. While still no stylist (O Norman, O Ancient Evenings!), Smith marches swiftly whenever his action chariot wobbles (“He was riding her like a runaway horse, and she paced him, meeting the thrusting drive of his hips . . .”). This latest installment tells how Taita, following the death of Queen Lostris, turns hermit, studies the occult, and becomes a divinely purposeful warlock. Smith’s great snap and liveliness have helped sell over 80 million copies worldwide. Warlock will get a major marketing campaign.