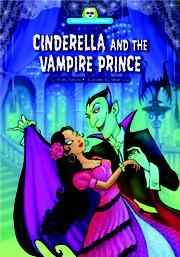 Cinderella and the Vampire Prince

This fairy-tale retelling by picture-book veteran Blevins (Colors All Around, 2016, etc.) and illustrator Cox (Ben’s Rocket, 2016, etc.) might be just what the fairy godmother ordered for readers who are bored of goody-two-shoes Cinderellas.

After a warning to readers that this story is “one of the scariest,” it introduces night-owl Ella, who rubs soot into her skin so that she’ll better blend into the darkness during her night wanderings. She climbs trees, howls at the moon, and frolics with the forest residents. Her stepsisters, meanwhile, are mean and take cleanliness too seriously. When the invitation to a prince’s ball arrives, Ella gives attending some consideration; she’s never wanted to marry a prince, but she does want out of her stepmother’s awful house. Problematically, she has no dress or ride; even worse, her usual, wonderful fairy godmother is on vacation. (Ella has caused her a lot of worry with her night wandering in the past.) Instead, a bat-winged, creepy fairy godfather shows up, granting her a dress worthy of a flamenco dancer and a blood-red tomato carriage with rabbit coachmen pulled by a white-tailed deer and a brown bear. Ella is the hit of the ball, and she loves the costumes of the other guests, who look like monsters, ghosts, and mummies. The problem? Those aren’t costumes, and the vampire prince wants to taste Ella’s blood. But maybe, Ella considers, a vampire wouldn’t be so bad as a husband. Although Blevins bills this book as a twisted fairy tale for brave readers, none of the monsters are too scary, and the happy ending is more comical than eerie. Confident, independent readers who love their stories with a hefty dose of Halloween humor will fall under this Cinderella’s spell, and they’ll applaud the ending in which Ella gets to be herself and enjoy her nighttime hobbies with someone who’s happy to join her (minus the blood drinking, which is glossed over). Cox’s illustrations capture the tone perfectly and introduce a cast of creatures that never crosses the line into terror.

A delightfully monstrous and fresh take on a traditional story.