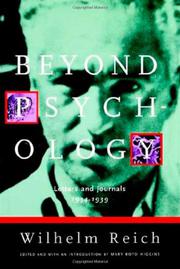 Madness and pathos alternate in these selections from the controversial psychoanalyst's (18971957) papers, which document the scientific delusions and personal difficulties that preoccupied him from the mid-1930s through his immigration to America on the eve of WW II. Because materials remain missing, this sequel to 1988's Passion of Youth: An Autobiography, 18971922 begins in 1934. In the intervening years of 192333, Reich's studies of the function of the orgasm and of genital sexuality's effects on character found him moving from psychoanalysis toward physiology and biology. Settling in Oslo, Reich put his radical political activism on the back burner while beginning a new program of experiments to examine nothing less than the fundamental energies of life. The excerpts from his journals and letters collected here form a streamlined narrative of his struggles to gain recognition for the theories to which this work gave rise. Reich believed that his insights represented ``the greatest discovery of the century.'' Readers need not be molecular biologists, however, to be skeptical of this claim: The laboratory jottings reproduced here seem like so much hocus-pocus. Meanwhile, Reich's ravings (``the living arises from the nonliving!!'') escape the lab to infect his accounts of a disintegrating home life. He can't seem to reflect personally on sex without proclaiming, ``My theory is correct!'' His children remain alienated from him, and his lover leaves him, but Reich consoles himself with the idea that his suffering is that of a man of genius. With his 1939 ``discovery'' of orgone, Reich seems to have gone over the edge for sure: ``I yearn for a beautiful woman with no sexual anxieties who will just take me! Have inhaled too much orgone radiation.'' At this point, the deepening shadow of Nazi expansion forces the Jewish and communist Reich's emigration to a credulous New York. Reich comes across as a crank, but a human figure all the same. Ideal material for a screenplay about a 20th-century mad scientist.